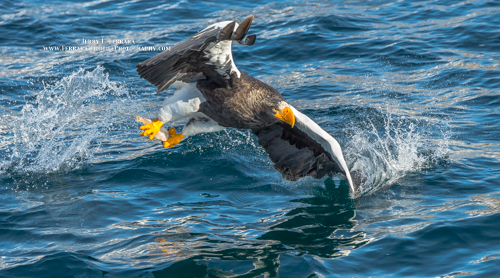 It tore through the maritime atmosphere like a bolt of lightning born from the vault of heaven. The creature’s flight speed was breakneck making framing the Steller’s Sea Eagle in the camera’s viewfinder a near-impossible task. As the powerful predator closed in on its unwitting target, the eagle’s position morphed and the geometry of the event became nearly perfect to my position.

Lowering its robust legs and outstretched steely talons, the Sea Eagle effortlessly snatched the hapless fish from its watery abode. The fleeting incident was explosive and simply over in the blink of an eye.

It was not until that evening, while viewing the day’s work on my laptop’s screen, that I realized I had made a capture that I have pursued unsuccessfully for years with our native Bald Eagle. Cradled within the borders of the image was the magnificent Steller’s Sea Eagle with a fish firmly clenched in its iron-tight claws, the tell-tale splash at the aft from where the quarry was plucked, a keenly determined stare blazing from the eagle’s eye and the part of the action that had always eluded me … one of the wing tips dragged through the water during a forward power stroke, complete with its own splash. I call this image, The Sweep.