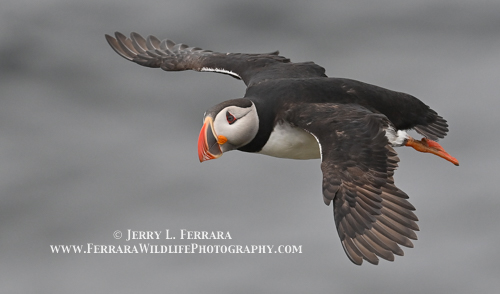 In A Split Moment

My first attempts at photographing flying Atlantic Puffins fell far short of my grandiose expectations. WOW! That was humbling. I’ve always prided myself for being able to capture movement, yet trying to find and focus [at 10x power] on a football-sized, bullet-shaped object moving faster than fifty miles per hour at short range resulted in disaster after disaster. To compound the issue, the sea’s wave lines in the background were messing with the autofocus acquisition. Time to change tactics. First I pre-focused the lens on grass or rocks at an estimated distance where the birds might be as they flew into the frame. When one was close, I started firing at 1,000-2,000 second with as much depth of field as possible considering the available light. I also concentrated on puffins flying higher in the sky where the distracting background was absent.

Here’s one of my first successful efforts. It was both challenging and rewarding to catch the speedy creatures in a split moment.